Back in Costa Rica, it's like a home away from home...
Touched down in San Jose, grabbed the bags, cleared customs, rented the car and on the road. We are in a hurry to get to Herradura beach, my girlfriend has this thing for waterfalls, I have this thing for going to see new places, and the last time we were in Costa, we heard stories of the must-see 3 tiered waterfall in Montezuma.  After a 20 minute wait at Herradura beach, a panga arrives. We haul our luggage to the beach to be wrapped in plastic to keep them dry on the boat ride.  We wade out in the surf and hop aboard with the other 6 passengers and 2 man crew. After a 45 minute ride, we reach Montezuma Bay. 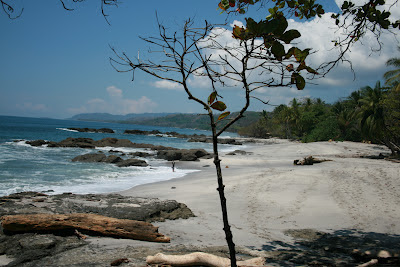 Unload and hop a ride to our hotel, with a room right on the rocky shoreline. Crashing surf, hammocks, the rain forest, smoothies- what a great place to kick back. 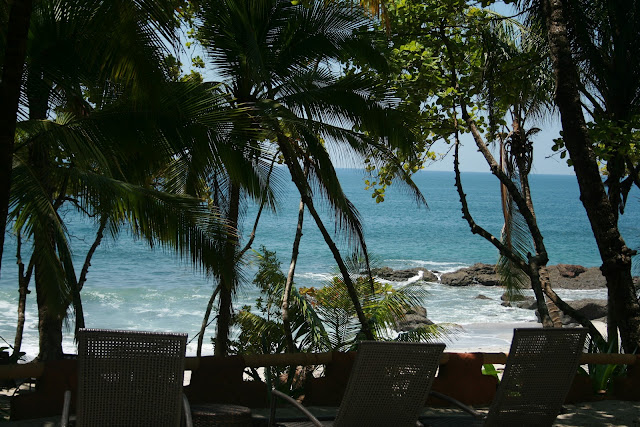 The next morning, after a Tican breakfast, it was time to go check out the waterfall everyone has been talking about.  Only a short walk from the "city hub," cross the bridge and take the first rocky trail to the right. A fifteen minute walk upstream, opened up into a large pool at the bottom of the falls.  It was hot, and time to get wet... 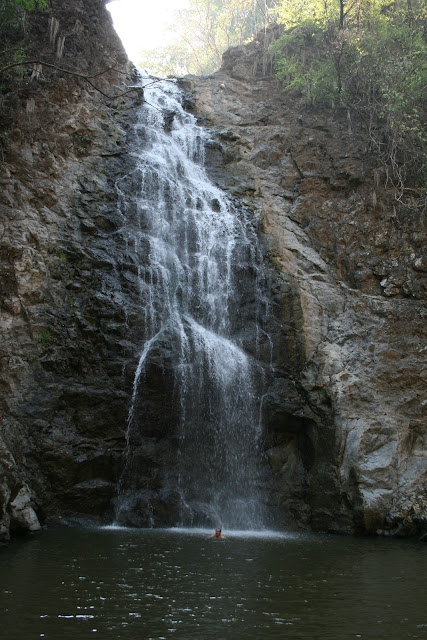 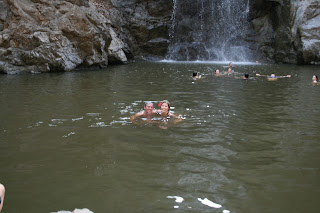 We had it mostly to ourselves, only a couple of people came in a few hours.  We are here at the end of the dry season, couldn't imagine how much water flows through here at the peak of the rainy season. After swimming til our toes pruned up, we decided to call it a day and head back to town.  About this time, my picture of health girlfriend, comes down with the cold of the century... With it being late, and no pharmacy in Montezuma, we'll just say that the over the counter selection was limited, at best.
The next morning we woke up early, Rebecca was feeling a little better, some decided to take an early morning stroll down the beach. 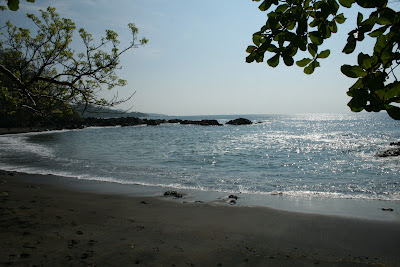 Thousands of crazy colored crabs scurried to their homes as we made our along the rocky path and shoreline. 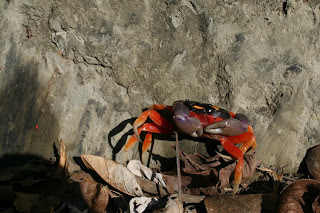 After a couple of hours of salt water and sand, we decided to make our way back to a very small waterfall we passed on our way out.  After a short uphill walk to its origins, we stumbled across one of the most relaxing pools and small waterfalls to spend the morning in. 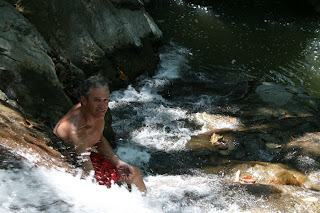 Later we grabbed lunch and decided to do what we came for and head for the upper two tiers of the main waterfall.
"We'll just walk, it can't be much further than where we went yesterday... Who needs a cab?"
Man, I hate it when I'm wrong.
Especially in front of my girlfriend...

Talk about a grueling journey... Straight uphill, 20 minutes of paved road, followed by ten minutes of gravel,  followed by 30 minutes of muddy mountain trails, a few wrong turns, and a little rock climbing, we finally reached our destination- the two upper pools.  Due to the dry season, the top tier was not much more than scattered pools and small flowing streams.  But the second tier was pretty cool.  From a ten foot cliff, you could jump in the pool, or they had a rope from an overhanging branch to swing in. Everyone there had their shot at fun. 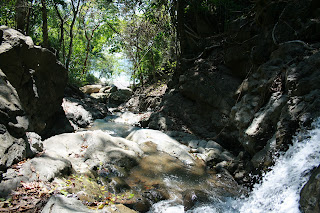 After dinner, Rebecca's condition deteriorated, the next morning she woke up more sick than I have ever seen her.  We hurried to catch the panga back to Herradura, and went straight to the pharmacy in Jaco.  I love Tican medicine! After explaining her symptoms, the pharmacist replied " You can take these pills and feel better in three days, or get this shot and feel better within the hour."
Of course, Rebecca chose the shot.  She stepped into the back room, two minutes and $8 US later, we are out.  In less than two hours, she felt back to normal. Now we can get on with our Tican adventure! Stay tuned, Nosara is next..... 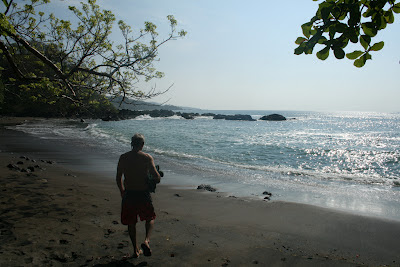 Capt Don
Posted by Capt Don at 5:40 PM No comments:

Most viewed on this site